A Letter From Jonny Polonsky 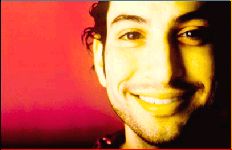 My name is Jonny Polonsky. I always knew that I wanted to be involved in music. I wanted to make records so desperately that I swore I would do anything within my powers to make it happen. I sent out enough demos to where I caught the attention of Tin Machine guitarist Reeves Gabrels. I was a fan of his and had found his name in Boston directory assistance. Reeves gave the tapes to Frank Black, who liked what he heard and helped me record a new demo.

Eventually, it got in the hands of Rick Rubin, who signed me to his label, American Recordings. Though Frank Black had produced the demo that had gotten me signed to American, I decided to rerecord the songs. I holed up in my childhood home for a few months and recorded myself playing all the instruments. Afterwards, Brendan O'Brien (Stone Temple Pilots, Pearl Jam, Matthew Sweet) mixed it. At the start of my relationship with American Recordings, I was just barely 21 years old. I was no longer in school and no longer in Kansas; I was headed for the Big Time, straight up to the top, up where the air is fresh and clean...

So after the release of my record, I put together a live band and hit the road. I toured North America for three months, opening for Frank Black. I did a stint on the second stage at Lollapalooza. There were interviews on MTV and in Rolling Stone. My record was getting a lot of fabulous press, both at home and abroad.

I went back into the studio, where I spent the better part of a year working on what was to be my sophomore effort for American. In the midst of this recording, Brendan O'Brien got me out of my contract. He attempted to whisk me away to Epic (where he was VP at the time), but to no avail, and the record was never released.

I spent a few years searching for a new label, as well as taking some time to recharge my batteries. Now, at age 27, I have a bit more wisdom and a few more stories, but I am not lacking for rock 'n' roll vim. Like the mighty cobra, I am poised and ready to strike--I have slithered through the muck and mire and I am ready to infect the citizens of the world with my new EP.

It is called There is Something Wrong with You. Six songs in sixteen minutes. As with my first record, this new one gets to the point-the songs come fast, throttle you like you asked for it, state their case and get the hell out of the way just in time for the next one. This method of operating leaves some listeners slightly dazed. Others find themselves slightly exhilarated, like they were just kissed dead on the lips by a sexy storm that blew through town and didn't ask for names, didn't say goodbye.

Do you remember when you were eight and you would lie in front of your portable turntable with the latchable lid and listen to your stack of 45s? Do you remember listening to them over and over again because you got chills when John and Paul hit the high notes in She Loves You and because you were able to hum along to the good part in Dancing Queen and because the words to Surfing Bird made you laugh?

Do you remember when you were still in school and you would drive in the car for hours on Saturday nights? Do you remember carting your drunk friends around, everybody bellowing out the choruses to who knows what songs, because you were all so goddamned bombed that no one remembers anything except that Bowie's songs sure went well with the moonlight and Boone's Farm Strawberry Wine, and that the Replacements were on your side even if the rest of the world wasn't?

I knew you would.