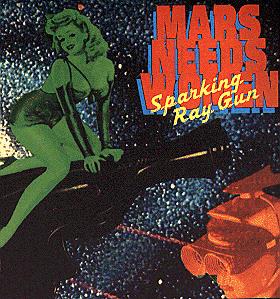 In a galaxy somewhere between noise and melody exist the ultrasonic sounds of MARS NEEDS WOMEN. From the shores of Jersey (remember "War Of The Worlds"!) MARS NEEDS WOMEN unleash their argo- pop on the unsuspecting earth with the release of their first album "Sparking Ray Gun".

The message from MARS is fast and hard - plenty of power, plenty of guitars and plenty of hooks. Shards of Bowie , New York Dolls, The Clash and Ramones careen like exploding stars. MARS fire retrorockets with a cover of the Damned's "Problem Child" and a blatant nod to Cheap Trick with "No Show".

They've shared stages with a who's who of alternative artists, having done stints with Collective Soul, Sponge L7, Babes In Toyland, Goo Goo Dolls, Swervedriver, D-Generation, Monster Magnet, and Everclear to name but a few. Aquarian magazine picked them as best group of 1994, and in a review of this year's Jersey music scene, Rolling Stone Magazine wrote "Bruce no longer rules the scene as proven by bands like MARS NEEDS WOMEN...."